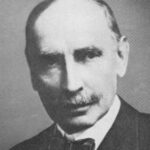 Ivan Nikolayevich Panin (1855 – 1942) achieved fame for discovering numeric patterns in the text of the Hebrew and Greek Bible.Having become a well known, highly educated firm agnostic, in 1890 his attention was caught by the first chapter of John, in which the article (“the”) is used before “God” in one instance, and left out in the next: “and the Word was with the God, and the Word was God.” He began to examine the text to see if there was an underlying pattern contributing to this peculiarity. Making parallel lists of verses with and without the article, he discovered that there was an entire system of mathematical relationships underlying the text. This led to his conversion to Christianity, as attested to by his publication in 1891 of The Structure of the Bible: A Proof of the Verbal Inspiration of Scripture. (Source: Wikipedia)

The Last Twelve verses of Mark, by Ivan Panin was originally published in 1910. It is the most unusual textual criticism book ever written. Panin proves the inspiration of this portion of Scripture through mathematics.